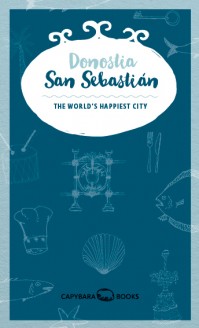 One of the most beautiful cities in the world

Donostia/San Sebastián – the pearl of the Spanish Atlantic coast, a city poised between tradition and modernity, where a romantic Belle-Époque atmosphere rubs shoulders with a dynamic spirit of optimism, the whole informed by unshakeable local pride and cosmopolitan open-mindedness.

Susanne Jaspers and Georges Hausemer’s description of the Basque metropolis, its citizens and their savoir-vivre, is based on years of personal experience. They know what subtle nuances distinguish Donosti, as the locals affectionately call their home town, from its eternal rival Bilbao. And they know what makes the Basque Country so special, and so different from the rest of Spain. They are familiar with the intensely emotional relationship of the Donostiarras to their history, their language, their culinary and other traditions and that very special kind of rain to which they have even dedicated a very distinctive perfume of their own making.

In some 30 reports, portraits and interviews the authors take their readers with them to pintxo bars and txokos, typical men’s cooking clubs which normally keep their doors firmly closed to outsiders. They initiate their readers into the mysteries of the tiny island of Santa Clara, of the International Film Festival, of the 24-hour drum parade and of a curious pleasure-ground which seems to have survived in a time-warp of its own. They accompany their readers to the legendary city beaches as well as to an all-weather bikini designer. Besides all that, they visit budding starred chefs at their avant-garde training centre and succumb to the rough-diamond charm of voluble publicans. They tell tales of rocky artistic friendships and report on a plucky companion of Basque mariners who sailed the seven seas with them: the water dog.

Georges Hausemer, born in 1957, is an author, translator and travel writer. His most recent publications are the novel »Der Suppenfisch« (2014) and a volume entitled »Zum Tschatscha in den zweiten Himmel. Lesereise Georgien« (2015).

When they’re not swanning around their favourite Spanish city, the authors are commuting between Luxembourg and a village in the rolling hills of the North Eifel near Aachen, where they find the peace and quiet they need to write more books.

Born in 1944 in Settle, Yorkshire, Peter H. Marsden studied Modern Languages (German and French) in England. From 1970 until his retirement in 2007 he lectured in the English Studies department of a German university. His research interests embrace both linguistics and literature, with a particular focus on Australian and New Zealand poetry. He is currently working on a study of the literary relations between Germany and New Zealand.